There are so many choices today when deciding on solar window film products for Heat and Glare Reduction. Back in the days you had simple silver reflective and dyed window films. Before that there was a liquid form called Flow-On, we are talking 70's here. Sometimes the two technologies were joined together (not Flo On) to offer a variety of shades and colors and this still holds true today but a more recent version of these popular silver based films came to market called 'Dual Reflective'. These products were created for better nighttime viewing. In most commercial buildings that install solar window film products the biggest concern is usually heat & glare control. There isn't much emphasis to maximize 'night view' in many high rise office buildings because frankly most employees go home before it's dark. Well, that's unless you are a busy law firm working on big cases in Santa Monica Los Angeles! This customer needed a film that would work like a typical reflective film but required to see through the glass during nighttime because many employees worked throughout the night. With window film there seems to always be a solution, but which one is the best solution and why?

Panorama Dual Reflective Slate 10 was the obvious choice here. Part of the reasoning was we needed to choose a film product that would reject enough glare (direct light) and heat as possible without it making the space too dark during the times when there was no direct sun. Since this was a wall of glass and given the uncomfortable situation many employees were experiencing on a day to day we recommended to go really aggressive. Even though the Slate 10 is considered a dark window film product (rejects 90% of the visible light) we were dealing with a LARGE WALL of glass so we knew there would still be plenty of daylight coming through even during the June Gloom periods. They use to have to close their window covering completely to offer some relief and even so the heat would get trapped in between the glass and coverings making the room uncomfortably hot during the afternoon hours. Unfortunately closing down the drapes completely blocked their view of the courtyard, so not only was is still uncomfortably hot but there was nothing to look through, uninspiring to say the least! Additionally as what usually happens, the HVAC system simply couldn't keep up with mother nature. After we were finished in just a few hours of work this customer was so thrilled of the results that they hired us to go back and do another wall of glass shortly thereafter. We know that the film has paid for itself and you don't have to take our word for it, most energy companies give big rebates to commercial buildings to install these very efficient coatings to their glass, taking the Shading Coefficient of the glass system to a level only seen in high end/high cost glass systems.

Notice even in these untouched photo's, there is plenty of natural daylight entering through the glass. Now employees are comfortable, can work more efficiently with an open environment whereas in the past they had to close down their window coverings completely just to continue work. 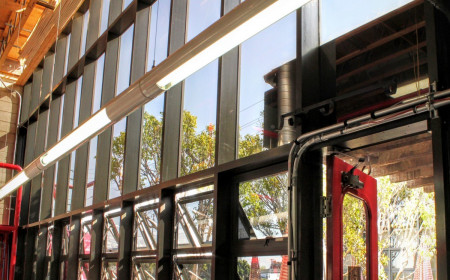