Solar window films are transparent films that are applied to flat glass, designed to reject up to 99.9% of the U/V Rays.  Solar films come in various shades and colors.  A quality solar film product will reject a large percentage of heat, glare and U/V. Depending on conditions and aesthetic needs,  solar films are available in reflective (mirrored) or non-reflective (natural) versions ranging from very dark to nearly invisible.

Our featured products include:

Saint-Gobain- The company behind Panorama and Solar Gard, offers the worlds only carbon negative window film. Solar Gard is the first manufacturer of window films to publish an Environmental Product Declaration (EPD).

These products are generally inexpensive to produce and have an abundance of shades and colors. Popular for extreme glare reduction, as seen in limousines, as well as multiple decorative purposes, these films can help fulfill many aesthetic needs. Dyed technology is not as efficient in solar heat rejection compared to our other offerings, but they do have their place.

Traditional films are dominantly used in commercial buildings and large skyscrapers. This makes sense because these films are low in cost and high in performance for heat rejection. Because of their mirrored appearance, reflective tinting can dramatically improve the appearance of a building by hiding mini blinds and office furniture. Since darker versions of reflective tintitng can function just as well or better than their more costly counterparts, they are a great choice for those on a budget and/or needing increased protection from the sun. 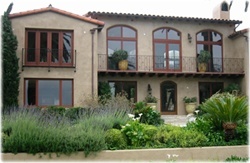 Huper Optik's patented 2-ply ceramic window film technology allows you to experience a crystal ClearView. Huper's 2-Ply Ceramic maintains low reflectance without sacrificing performance. This original ceramic technology has always been a favorite with our oceanfront customers because ceramic is an inert technology and will not corrode like most metal-based products.

The benefit of this patented ceramic window film is the ability to naturally preserve a nighttime view.

Beware of imitators! Check out our blog on ceramic window tint or call us for more information. 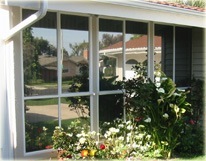 Dual Reflective Window Film technology refers to the difference of reflectivity. This is important because these films reflect less towards the interior side of the window. The benefit is you see through your treated glass much better at night time. Dual-Reflective Films are preferred by both residential customers and business owners because of the additional benefit of a better night view but with nearly the same results of the more efficient traditional reflective window films. Dual Reflective films are often referred to as "two-way-mirrored" films. During the day it's possible to provide privacy while looking inside your building, but you are able to clearly see out.  As well as having great aesthetics, these films are priced favorably for nearly any budget. 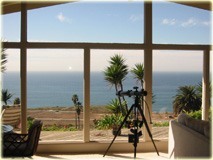 Generally the rule of thumb for heat rejection is the darker the better. Spectrally Selective window films break this rule by allowing the most light in while blocking most of the heat. "Spectrally Selective" window film technology is the most common term used in our industry that defines the ability of a particular product to reject a high amount of select spectrums of the suns electromagnetic spectrum. To be selective.

One of the most difficult tasks of a window film manufacturer is to create such a film that will allow practically all the light in but reject most of the heat.  Hence the name, "spectrally selective". The most popular and effective spectrally selective window film products are manufactured with precious metals. Yes, there are traces of gold in these films, imagine that! Synonymous with such terms as high performance & precious metals, spectrally selective window films are the pinnacle in window film technologies. If you are in the market for this type of product, we recommend you choose a product that filters out as much of the infra-red radiation (I/R) spectrum as possible. Within the solar spectrum near infra red radiation falls in between 780 nm to 2,500 nm. The I/R band is known to be 1,720 nm wide. In other words, this is the time you really want to read the fine print. One popular brand name is known to market incredibly high I/R rejection numbers on their sample spec cards but unfortunately these numbers only represent a large number of a very small chunk of the I/R spectrum as noted in their fine print.

However, I/R is not the only spectrum responsible for the cause of heat. The visible light spectrum is responsible for some of this heat as well because 44% of solar energy consists of visible light. For the ultimate in heat control with no added reflective appearance, darker shades of this technology are available.

In most cases, these products are non-reflective. Reflective versions of our premium solar film products are availble for unique circumstances such as a product that offers the following three features, light tint/ daytime privacy/high heat rejection. We personally call it 'SSRF' or spectrally selective reflective film.

just because... "An Informed Customer is a Satisfied Customer"